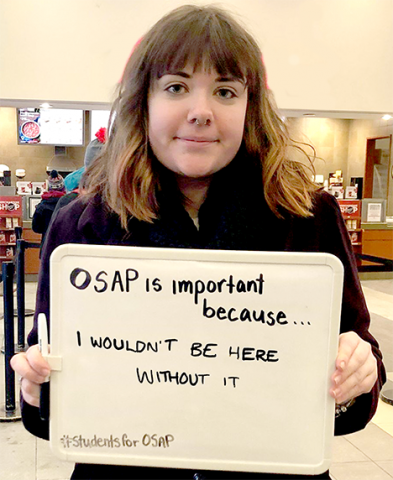 The 40-year-old immigrant from Bangladesh went back to school in December. A community college education was going to be his big chance—a way to make a better life for himself, his wife and their kids. He used an Ontario Student Assistance Program (OSAP) grant to cover the cost of his tuition. Ford has cancelled those grants.

Mohammad’s big chance is over. “I’m really disappointed,” he says “and now I’m worrying. How am I going to pay $5,000 to Centennial? I don’t have any family here. I can’t ask friends for money.”

40% of students got full-tuition grants

Mohammad Hossain is not alone. More than 234,000 students from Ontario families with income less than $50,000 got the full-tuition grants. That means 40 per cent of the full-time, domestic student enrollment in Ontario is now scrambling to pay tuition that was supposed to be covered.

In some colleges, nearly three-quarters of full-time students had their tuition paid in the first year of the program Ford just cancelled.

Many of the low-income students are the first in their families to attend a post-secondary institution. They depend on financial aid as they are older students, sometimes with children.

The Ford cuts mean most students will once again have to depend on loans to pay for some, or all, of their post-secondary education

The government has also scrapped the six month “grace period” after graduation which allowed students to look for work and get on their feet before starting to pay back their loans. Loans will now be due the day after graduation. This will make it even more difficult for young people to make solid plans for a real future.

The Ford hatchet job on OSAP was packaged as a benefit to all students, as it came with an across the board 10% tuition cut. But in reality, it is a big brand new bonus for students from rich families who never before qualified for any OSAP benefits.

This inequality is made worse by the fact that even though tuition will be lower, low-income students will have to now borrow money to cover their tuition and pay it back with interest—something they did not have to do before the Ford OSAP cuts.

The Ford changes to OSAP also included an option for students to “save money” by opting out of what additional fees they pay, such as those that fund campus organizations, student newspapers, clubs and the student union.

These groups are an important part of the overall university experience, helping students to find support and hone their life skills, says the College Student Alliance. They added that the OSAP changes had “effectively destroyed student representation at the college level.”

The sum total of the Ford changes will make life much more difficult for students and community college and university administrators.

It is estimated that about one-third of university revenue comes from tuitions, so slashing tuition by 10% will take a big chunk out of the money post-secondary institutions will have to provide the quality education students borrow to pay for.