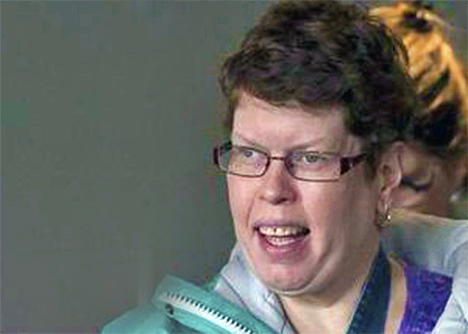 THEY TORTURED BETH MacLEAN THE LONGEST. Shelia Livingstone and Joseph Delaney for not quite so long. It was all very unfortunate, said J. Walter Thompson. But no reason to question the overall approach to care of the disabled in Nova Scotia.

THEY TORTURED BETH MacLEAN THE LONGEST. Shelia Livingstone and Joseph Delaney for not quite so long. It was all very unfortunate, said J. Walter Thompson. But no reason to question the overall approach to care of the disabled in Nova Scotia.

Thompson came to that conclusion as part of his one-man board of inquiry into a human rights complaint launched by Beth, Shelia and Joseph. All three had been held against their will in institutions run by the government of Nova Scotia. They wanted the human rights automatically granted to every Nova Scotian—disabled or not—beginning with their personal freedom and housing in small homes in local communities.

The province had denied them that for years. They kept all three locked up in mental health hospitals for years—even decades. Beth and Joe were never mentally ill. Sheila had been, but was cured.

Beth MacLean was taken into provincial care at age 14 in 1986. In 2000 she “acted out.” They moved her into a locked psychiatric care ward in the Nova Scotia Hospital. She was not mentally ill. She was angry about 14 years of disrespect.

The province repeatedly told her they would free her and find her a place to live in the community. They never did.

They kept her locked up for almost 20 years. Thompson writes this was “entirely against her own wishes as a competent woman and contrary to the overwhelming consensus of professional advice.

“The Province denied her meaningful access as a disabled individual to a service generally available to other disabled people—a small options home.”

Thomson rejected the province’s argument that it had no options for the three, saying there was evidence from multiple government officials and experts that suitable housing and care could have been provided.

However, he also rejected the argument that timely placement in small-options homes is a human right.

The beat goes on

Disability rights activists are determined to use the Thompson rulings to spur more action. The Disability Rights Coalition is collecting signatures to an open letter to Premier Stephen McNeil, asking his government to stop warehousing people with disabilities and focus on investing in community living options instead.

The group also recommends the 1500 people who are institutionalized and/or waiting for a community living opportunity file their own individual human rights complaints.

People First Nova Scotia (PFNS) has been working to free people with intellectual disabilities from a life in an institution since 1989. The group held a news conference in early April to press for action in reaction to the failures revealed in the Thompson inquiry.

“We are calling on the government to keep its promise and set our people free,” said PFNS spokesperson Jeannie Whidden.

Jen Powley spoke for No More Warehousing, the Nova Scotia Association for Inclusive Homes and Supports. She told of how her parents sold off family farmland to provide the care she needs. “Now there is no more farmland left to sell,” she said.

“My parents can no longer afford the $100,000 annual bill for my care. Now I am faced with going into a nursing home.”

She is not alone. There are over 240 people with severe physical disabilities in Nova Scotia, currently being warehoused in nursing homes.

The Liberal government has committed to close large institutions and build small option homes—small housing units, usually with three or four residents, where day-to-day support is provided to people with intellectual disabilities to allow them to live in their community.

The coalition believes that in order to keep its promise government needs to commit to building 25 new small option homes each year until 2023. However, in the last two years, work has begun on only eight such homes.

The Thompson hearing decision is the first in a two-stage process.

The second part of the hearing, to be held later this year, will allow the province to defend the discrimination and argue it is not a violation of the Nova Scotia Human Rights Act.

Disability rights activist Robert Devet says the fact the human rights complaints forced a public hearing shows one way to get things done. But should not be “our only iron in the fire.” His advice: “Never abandon political pressure and direct action.”