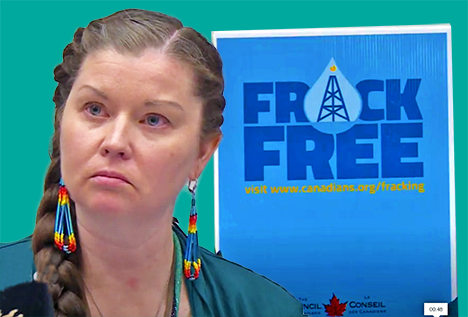 CAN TWO GRANNIES BRING DOWN BIG OIL? Probably not. But they’re giving it their best shot.

CAN TWO GRANNIES BRING DOWN BIG OIL? Probably not. But they’re giving it their best shot.

Two Mi’kmaq grandmothers and their supporters served Alton Gas with an eviction notice March 11. They want the Calgary-based company off their lands near Stewiacke, Nova Scotia.

The Mi’kmaq grandmothers, Doreen Bernard and Elizabeth Marshall, say the Mi’kmaq people never gave up their rights to the land the company is operating on. They say the company is trespassing and should be ordered to leave.

The notice states: “The eviction of Alton Gas is non-negotiable. The disturbance and intended harm to our Sipekne’katik River has cost enough time from the lives of our people, and it must not cost our next generations.”

Marshall said the eviction notice has been sent to Alton Gas, but they have not received a response.

Mi’kmaq resistance from day one

The Mi’kmaq have resisted the project since 2014 and have remained at the site since 2016—even occupying land at a ceremonial Treaty Camp and Truckhouse adjacent to the proposed brine discharge site.

Alton Gas proposes to store natural gas in natural underground caverns along the Sipekne’katik (Shubenacadie) River at a site about 60 km northeast of Halifax. The corporation plans to use salt brine to hollow out the natural caverns. It then plans to pour the used brine into the river at the rate of 10,000 cubic meters a day.

The water protectors say the project would destroy the river’s fish and ecosystem.

The grandmothers and protectors say they will continue to protect the river for the next seven generations. They say it isn’t a matter of money or politics—it’s a matter of sacred responsibility.

“This is our sacred duty as life-givers to protect the water for those that don’t have a voice,” said Dorene Bernard with Grassroots Grandmothers Circle.

The province of Nova Scotia granted environmental approval for the operation, and the federal government will regulate it to manage potential threats to the ecosystem and human health.

But the women say the project does not have Indigenous consent, has not met legal consultation requirements and is not welcome.

“There is not one man on Earth that can remove my authority that was given to me by the grandmothers, by my nation, through ceremony on behalf of Creator and the ancestors.”

Land and water defenders have been occupying a homemade cabin at the edge of the site since 2016 to disrupt company access and work. A court ruling in late March ordered the defenders to leave—or be removed.

“Alton gas needs to google our history in upholding our treaty and our title,” said Marshall.

The women say they are prepared to protect the river, regardless of the court’s decision regarding Alton Gas’s application for an injunction.

The Mi’kmaq claim to the land is not settled in law. Justice Gerald Moir relied on that fact to rule in favour of Alton Gas and grant a permanent injunction against the water defenders encampment on the site.

However, Moir did acknowledge the Indigenous right to fish in the Shubenacadie River had been upheld by the Supreme Court of Canada in a 1999 case brought by Mi’kmaq fisherman Donald Marshall Jr.

The Marshall ruling established that First Nations people on the east coast have a right to hunt, gather and fish to earn “a moderate livelihood.”

However, the judge added he saw “no support for Mr. Poulette’s land claims” for the sites along the river.

The RCMP had no immediate comment on whether or not forcible eviction would be used if necessary to enforce the court order.