The ‘Green New Deal’: a plan to remake the USA 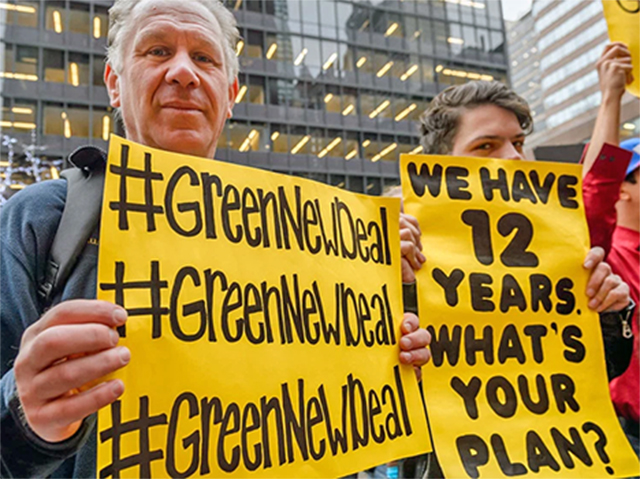 CAN A ‘GREEN NEW DEAL’ DO IT AGAIN? Many progressives in the USA think it can. They believe a massive government program can re-make the USA the way the original New Deal did in the 1930s.

CAN A ‘GREEN NEW DEAL’ DO IT AGAIN? Many progressives in the USA think it can. They believe a massive government program can re-make the USA the way the original New Deal did in the 1930s.

Firebrand Democratic Congresswoman Alexandria Ocasio-Cortez and Senator Ed Markey introduced their “Green New Deal” in the US Congress this past February. Their program presents a bold vision of a different world, one built upon renewable energy, green jobs, social equality, substantive climate protection and anti-pollution measures, and include allied initiatives such as national infrastructure renewal and increased public transport. 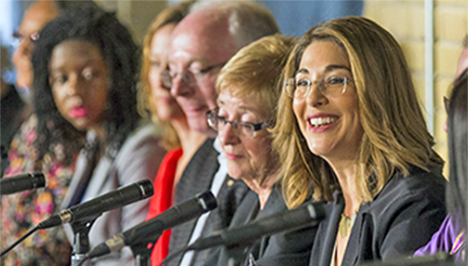 Their plan is to use the federal government in openly aggressive, activist and daring ways to combat global warming—much as President Franklin Delano Roosevelt did to rescue the USA from the economic catastrophe of the 1929 Great Depression.

The FDR New Deal completely changed relations between bosses and workers. Bosses were forced by law to recognize unions and to bargain with them. The standard of living improved for millions of people. The government also took direct action to give people paying work on massive public works projects—many of which involved environmental protection and conservation.

For example: the Civilian Conservation Corps (CCC) employed about 3 million men in what might today be called green jobs, including carving park trails and fighting wildfires.

[6] Fund massive investment in the drawdown and capture of greenhouse gases.

[7] Make “green” technology, industry, expertise, products, and services a major U.S. export. As a result, America could become an international leader in helping other countries transition to completely carbon-neutral economies.

Just like the FDR New Deal, the Green New Deal wants to connect the dots. Global warming may be the driving factor behind the sense of urgency expressed in Octavia-Cortez’ motion, but finding a remedy must include an end to grotesque income inequality that involves nothing less than social and economic transformation across the board.

Our own Canadian Leap Manifesto, launched in 2015 by a broad coalition of environmental and labour activists, makes many of the same points.

These “green ideas” are not welcomed by those with a stake in the status quo. Powerful corporations, conservative politicians and right-wing media ideologues—even senior members of Ocasio-Cortez’ own Democratic Party—are not reacting well to her “Big Hairy Audacious” vision of the future.

“How can we pay for all this?” is a frequent cry from critics. However there is also suuport—some from unexpected quarters. Forbes Magazine—proud to label itself a “capitalist tool”—allows that the Green New Deal could be an unparalleled job creation machine, an impetus for a strong, vibrant, green economy.

The “greening of the economy” is also a very popular notion among everyday Americans—including a convincing majority of both registered Democrats and Republicans.

Visions are different from concrete plans, but they drive plans. Clinging to the status quo, with tweaks, is no longer a serious option. It’s clear the debate over global warming now needs to become a discussion on the the nuts and bolts of implementing a green, democratic future, not just in the USA but around the world.

Leap Manifesto activists note, with approval, that the Green New Deal is even more ambitious than their own initial vision for change.

Can a made-in-Canada Green New Deal be in the wind? Here’s hoping.