Millennials take it to Trudeau over global warming 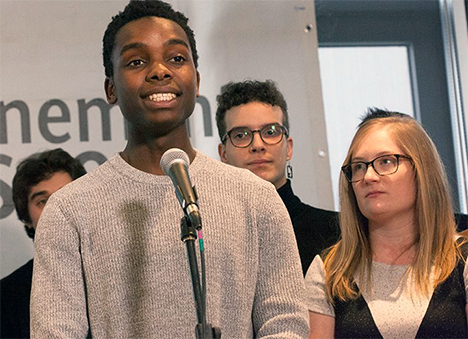 CATHERINE GAUTHIER IS AFRAID FOR HER LIFE. She blames Justin Trudeau. She wants the courts to order the prime minister to do a lot more to end her fears.

CATHERINE GAUTHIER IS AFRAID FOR HER LIFE. She blames Justin Trudeau. She wants the courts to order the prime minister to do a lot more to end her fears.

The 29-year-old climate activist is part of Environnement Jeunesse, an environmental youth group based in Montreal. The group believes global warming is a clear and present danger to their lives right now and will be much worse in the future. They want the federal government to do a lot more to reduce, if not eliminate, that danger.

To get the government to do that the group has applied to the Superior Court of Quebec to bring a class action lawsuit on behalf of all Quebec residents under the age of 35.

The lawsuit alleges that “the Canadian government is infringing on a generation’s fundamental rights.” This is in part because leaders like Trudeau are failing to meet the climate targets Canada agreed to at the Paris climate change talks.

“Rather than creating a fast [low-carbon] transition, the Canadian government is going the opposite way by buying a pipeline,” says Catherine.

“What we understand from this action is the Canadian government has decided to protect the oil industry rather than the future of children and younger generations. So that’s really frustrating.”

This failure to do enough, soon enough means that people under 35 will bear the worst consequences of the global warming disaster, says Environnement Jeunesse. The Intergovernmental Panel on Climate Change warned this fall that we only have a dozen or so years to avoid catastrophic damage.

Catherine takes it all very personally. It terrifies her that she could experience devastating climatic changes in her lifetime. “In 2030, I will be 41,” she says. “So I’m really scared about the impacts of climate change I could be experiencing.”

“Maybe I’ll have one or two kids. What will their future be?” asked David Morin, a 20-year-old student and vice-president at Environnement Jeunesse. “Delaying action will only make the consequences of climate change worse for me, my children, for all young people and future generations. It’s fundamentally unjust.”

Bernadette Veilleux-Trinh, a 17-year-old student working with the environmental group, argued “it’s time for my government to take responsibility and stop violating the rights of young people.”

The odds of winning the case, or even getting to court, are not good.

Environnement Jeunesse will have to convince the courts that the federal government is not acting quickly enough on climate change and that this is a violation of the Canadian Charter of Rights and Freedoms, because it denies  the rights of young people in Quebec to enjoy a safe and stable future.

A stretch—but not an absolute impossibility.

In 2015, the District Court of the Hague ruled that the Dutch government must increase its efforts against global warming following litigation brought on behalf of 886 citizens.

The case made climate change a major political and social issue in the Netherlands and transformed domestic climate change policy. It inspired climate change cases in Belgium, New Zealand, Ireland, the U.K., Switzerland and the U.S., according to a trial summary.

And in the U.S., teens suing the federal government for inaction on climate change have, against the odds, cleared one legal hurdle after another. Though the Donald Trump administration has several times challenged the litigation, preparations continue for it to be heard in the United States Supreme Court.

“In some ways Canada is long overdue for a legal challenge of this type,” said Andrew Gage, a staff lawyer with the Vancouver-based group West Coast Environmental Law. “There is definitely a growing trend for that.”

Gage argues that the Quebec case can have an impact, even if it doesn’t achieve legal victory. “What these cases do is correctly frame climate change as protecting people here and now.”

“There’s been too much of a trend to assume that climate change is somehow in the future but no one’s really been affected yet, even as we see wildfires and floods.”

“Just filing this case is in a sense a victory,” says Martin Olszynski, an associate law professor at the University of Calgary who studies environmental and energy cases.

“They’re really looking to push the discussion [around climate impacts] in as many venues as possible, not just in politics but in the courts of the country.”

At the 2018 Paris climate talks, Trudeau said his government would return Canada to the leadership in the fight against global warming. “Canada is back my friends,” Trudeau said at the time.

In the years since then Canada’s oil and gas emissions have continued to go up and up. Trudeau spent $4.5 billion of our dollars on a clapped-out oil pipeline.

Catherine Gautier and her friends at Environnement Jeunesse are determined to haul the prime minister into court to make him live up to all his fine words. They're the ones with the most to lose if he doesn't.