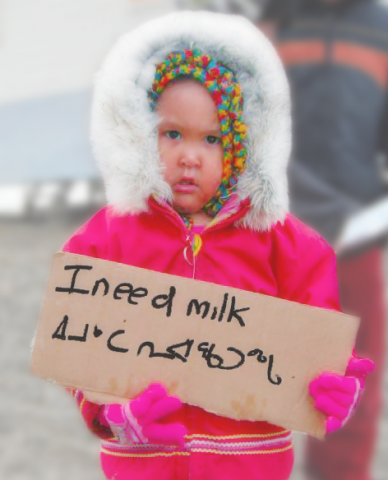 NUNAVUT MAY BE THE HUNGER CAPITAL OF THE WORLD. Food Secure Canada says food insecurity rates in Nunavut are the highest among indigenous people anywhere in the world.

NUNAVUT MAY BE THE HUNGER CAPITAL OF THE WORLD. Food Secure Canada says food insecurity rates in Nunavut are the highest among indigenous people anywhere in the world. That’s because food there just costs too damn much:

Eating well at these prices is impossible. In fact, eating at all becomes a daily difficulty.

Leesee Papatsie is working hard to change that. She started in 2012 by organizing a rally in Iqaluit to protest the sky high price of food in our north and by creating the Facebook group page Feeding My Family. The group now has 22,654 members.

“We get many posts that tell the same story.” says Leesee. “People buy food until they run out of money. They might borrow money to put food on the table, but then they have to pay for rent. What do you do? Buy food or pay for rent?

Rent for a three-bedroom apartment in Iqaluit is $3050 a month.

“There are a lot of these dilemmas that Northerners have to deal with every day.This is a common cycle. We see posts like this quite regularly. It’s a vicious cycle.”

Seventy per cent of Inuit preschoolers are food insecure. And while Nunavut’s children are not starving, many display signs of malnutrition rarely seen in other parts of North America—from nutritional rickets to missing or decaying teeth. 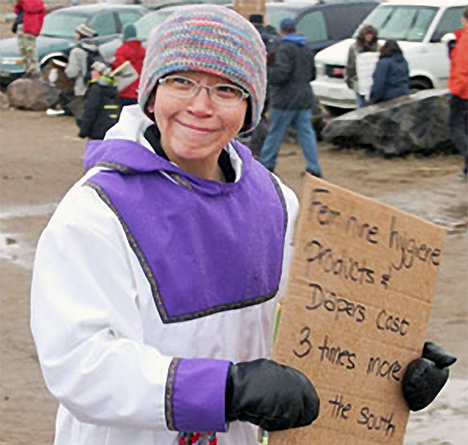 High prices for food flown in from far away is acceptable enough. What is not in any way acceptable is how non-Indigenous bureaucrats invented and imposed policies to force Indigenous people to depend on that food. Another sad and shameful chapter in the history of our plunder, discrimination and neglect of all our Indigenous people

During the 1950s, 1960s, and 1970s, Ottawa forced Inuit residents in Nunavut to give up their traditional nomadic lifestyles and instead move into fixed settlements. As a result, much of the knowledge of how to harvest and prepare local sources of food was lost. Traditional foods have been replaced over the past 50 years with store bought groceries, which are still unfamiliar to many Inuit.

To make matters worse, chances of getting work to earn enough to pay for food from the south are almost non-existent in Nunavut. But, even with a job, eating well remains out of reach: Inuit workers earn on average $23,000 a year; the average yearly income for non-Inuit Nunavut residents is $92,000.

There is a federal government program to subsidize healthy and staple foods sold by northern retailers. But Nutrition North has received significant criticism from customers and researchers alike.

The Feeding My Family group has no illusions. It knows if the Inuit people themselves do not lead the fight for real change none will happen.

As they explain: “From Northern Labrador in the east, to Northern Alaska in the west, we are using this group as a forum where Northerners can come together to work toward positive change, despite the distance that separates our communities.”

After months of “listening to what our group members have been saying” the group settled on seven key objectives. Five involve specific changes to government policies. The first two, however, focus on themselves. They are:

If Nunavut is truly the hunger capital of the Indigenous world it is up to all 35 million of us to fix it. If we do not, all our fine words mean nothing, our promise that no child in Canada should ever go to bed hungry means nothing.

If we do not demand robust, culturally appropriate food-security policies, co-designed with the Inuit people themselves, we will remain complicit in the heartless systematic abuse of the Inuit.