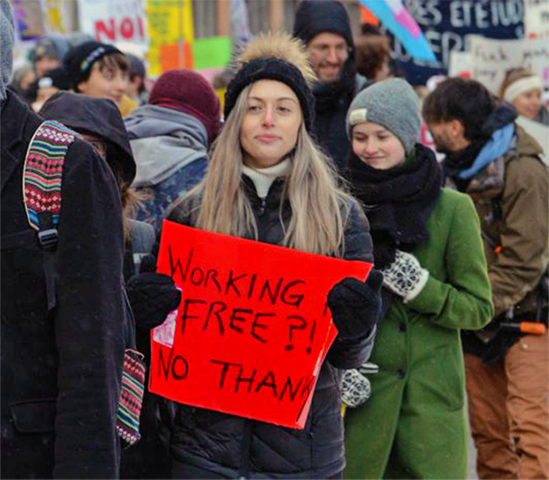 YOU WORK. YOU GET PAID. Thirty-five thousand students in Quebec took to the streets to drive home that simple principle again in mid-March.

YOU WORK. YOU GET PAID. Thirty-five thousand students in Quebec took to the streets to drive home that simple principle again in mid-March.

Their mass walkout from March 18 to 25 was a pointed reminder to the Avenir Quebec government to keep its word. Mass student demonstrations last fall extracted a promise from the first-term government to meet with them to work out how to end unpaid internships and extend all labour law protections to interns.

The government did not keep its word. The meeting with the minister of education never happened. The March 21 budget did not include any provisions to cover unpaid internships.

Fed up with false promises

“Stop asking us to be patient on one side and ignore our claims on the other,” said Concordia journalism student Erika Morris. “Today it’s clear that Minister Roberge was only trying to stall our movement with false promises.”

“Strike tactics in Quebec have seen a lot of victories from the 60s up until now. We saw it especially in 2005 and 2012 and we believe in continuing that movement. It has a long history of success in Quebec. It is the right way to approach this,” Morris told CTV News.

Some students work more than 1,000 hours in internships, with no protections or salary. Another key concern for the students is that most unpaid internships are in fields that attract mostly female students, such as nursing, teaching and social work.

At a time when there is a shortage of teachers and nurses in the province, students are often used as a source of free labour, said Denyse Joseph, vice-president of the Quebec Nurses’ Federation. “The students are doing the work as if they were a nurse or a respiratory therapist.”

Joseph said some employers often take advantage of this to fill in when their regular paid staff is unavailable.

The interns’ movement agitating for strike action has been a growing force in Quebec since 2016:

Last November, 58,000 students across 30 student unions in Quebec embarked on a week-long strike against unpaid internships;

The year before, 30,000 students took to the streets on International Women’s Day to protest unpaid internships in fields dominated by women.

The change the students want begins with killing off the pernicious idea that students are somehow not workers. How can that be, they ask, when student interns do the exact same work as paid staff ? Yet, Quebec labour laws maintain this fiction by expressly denying student interns labour law protections.

The recognition of student interns as workers like any others logically leads the students to two concrete demands:

A tweet from the minister of education following the budget again promised action. Roberge said: “scenarios concerning the compensation and supervision of internships will be tabled at the end of April. We have been assured by the minister of finance that money will be available to deal with them as soon as the next school year starts.”

The fact the minister reduced his concern over the unpaid interns issue to a tweet, combined with the carefully chosen bureaucratic language in the tweet itself, is not likely to do anything to convince the student strike activists to end their campaigns.