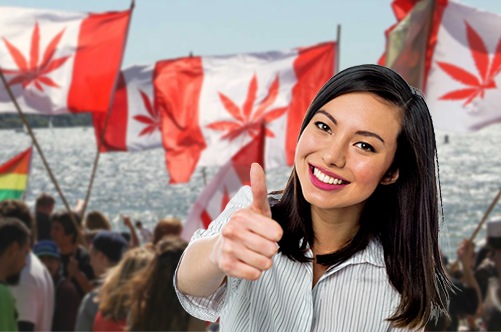 The legislation of recreational marijuana in Canada has led to some very interesting questions and public discussions. Whether you agree with the decision by the feds to move in this direction is really beyond the point. What matters now is how do we deal it?

The Liberals arguments for legalization, talked about stopping people from getting hurt and to take out the black market for cannabis products by making the substance legal, but regulated. And to protect the children. Oh my god, the poor children. Then, they turned to the provinces who actually have the jurisdiction over all retail sales and said you figure it out.

Who should sell cannabis?

Across the country this has created chaos from a public policy perspective with some holding cannabis sales to existing alcohol sales outlets like public liquor stores while others have held lotteries and contests for private sector retailers.

In Ontario, the previous government started out trying to use the LCBO system. That was scrapped by the Ford administration who opted for a limited private sector lottery and a mail-order supply through the LCBO. More chaos ensued and is still continuing on that front.

But what happened, and is happening underneath that shambles of public policy making in Ontario, is an exercise that bears some closer examination.

One of the aspects of the former Liberal policy that was kept by the Cons when they took over was to allow each municipality in Ontario to decide if they wanted to allow retail pot shops in their community. Some city and town councils took this as green light to do whatever they wanted, and they quickly signed up and encouraged their friends to sign up for some of the swag that would ensue to them both.

But other communities took this as an opportunity to engage in one of the few public policy making processes that any of us have seen. Their councils opened an engagement with the community and brought in experts to hear their views on safety, justice and not just whether they could make money, but how to ensure that any retail weed sales were handled fairly, safely, and without causing too much disruption to the everyday life of their communities. They held public forums and asked citizens to come forward and give their advice, opinion and guidance to their elected officials. It was truly a breath of fresh air.

At the end of the day on January 22, 77 municipalities decided to opt out of the retail cannabis business. Nearly a quarter of Ontario’s cities and towns gave it the thumbs down including Mississauga, Markham, Vaughan, Richmond Hill, Newmarket, Milton, Oakville, Brantford, Pickering and Whitby. That’s a combined population of almost 2.3 million people right there.

Mississauga Mayor Bonnie Crombie said there was “great concern” that municipalities had no say over where cannabis stores could be located. Caledon Regional Councillor Ian Sinclair also expressed his concern with the plan, telling the Caledon Enterprise.com that he would have preferred the LCBO because it has experienced staff and a set of rules that are already proven. That choice was no longer available to them, so they preferred to say no.

At the end of the day, the decision they reached in Ontario municipalities is secondary to the fact that we had real democracy in debating and creating public policy. The big question coming out of this whole discussion is how do we keep it going?

How do we keep ourselves at the core of our democracy? How do we ensure that everyone, and not just the biggest interests, are heard? How do keep the bad guys out and allow a fair process for everyone else? How do we protect our communities and our children?

Oh yeah, the children. Tell me again, who is protecting their interest and keeping them safe. Who is standing up for the public interest?