Students rising up to demand a liveable future 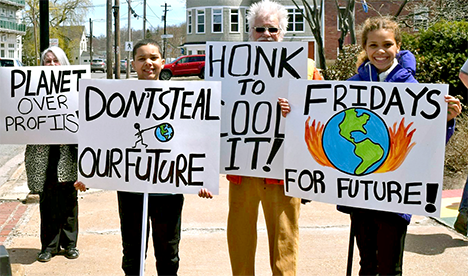 Students take the lead to combat climate change. In early January 2019, in response to the political climate, students in Montreal aged 15 to 22 started organizing as La planète s’invite à l’Université (LPSU) and Pour le Futur (high school). In just three months, the collectives organized tens of thousands of students across Quebec to participate in the Global Student Strike for Climate Action on March 15.

BY PEYTON MITCHELL
Peyton is a university student and climate justice activist in Montreal.

In early January 2019, in response to the political climate, students in Montreal aged 15 to 22 started organizing as La planète s’invite à l’Université (LPSU) and Pour le Futur (high school). In just three months, the collectives organized tens of thousands of students across Quebec to participate in the Global Student Strike for Climate Action on March 15.

The Montreal march brought 150,000 supporters onto the streets to demand climate justice from our governments, the largest in the world on that day by far. Immediately afterward, students were holding meetings to discuss next steps, and how to leverage the attention from the march to make an impact on the coming  federal election.

In the weeks after the March 15 protest, student activists met with Quebec Minister of Environment Benoit Charette, who wasted their time during midterms by speaking at them and not to them, about the climate crisis and some of their demands were presented to the National Assembly of Quebec by Quebec Solidaire leader Manon Masse.

While some members continued to work within the Quebec political landscape others began to reach out to youth across Canada. Students from Vancouver, London, Kingston, Ottawa, Stratford, Montreal and Toronto began to organize remotely via the online workspace, Slack as “Climate Strike Canada”. Their goal is to create a national network of student climate activists to ensure Canadian youth can present a united voice on what we expect from federal climate platforms in this election.

In April in the midst of term papers and finals, the student network made crowd-sourced climate justice demands through an open google doc. Students from all over Canada wrote in what they expected from their governments and older students organized them into seven clear, non-negotiable demands:

The kids are alright

On May 3, the network held a national strike that hit 90 towns across Canada. The strike is a call you action from youth to older generations. We need help. The climate crisis threatens our livelihoods, our futures and our human rights.

Kids aren’t looking for attention, or taking any excuse to skip school. While the media obsesses over how cute and inspiring these kids are, their futures are slipping away. Strikes are a cry for help, it’s not cute that kids don’t see a point in school due to the climate crisis, it’s devastating and to the people who are calling it inspiring, do something and join them.

These kids don’t want to change the world, the world shouldn’t be this way. All they want is to go to class knowing they have a safe world to live in. The media likes to ask us why we’re striking for climate justice, we don’t have a choice. Our question is, why aren’t you?

September 27, Climate Strike Canada is calling for adults to join us in a general strike for climate justice. We need to stop and demand a Green New Deal from our leaders. We don’t have time for business as usual.