Movie star guests on US TV; calls for action in Boat Harbour NS 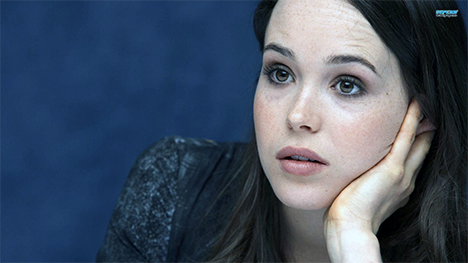 The storm swirls around how the Northern Pulp Mill in Pictou, NS plans to meet new environmental standards.

In short: a politician’s worst nightmare. Yet, Justin Trudeau prefers to pretend it is none of his business. He chooses to simply look away—despite the persistent calls from all parties for the federal government to intervene and stop everything with a rigorous environmental impact study.

The mill plans to pump up to 93 million litres a day of “treated” effluent, heated to 37 degrees, into the Northumberland Strait (the narrow strip of the Gulf of St. Lawrence that separates Nova Scotia from Prince Edward Island.)

Northern Pulp also wants to delay the closure of the mill’s Boat Harbour toxic waste pond by a full year—even though the 2020 closing deadline was set five years ago.

Finally, just to remind all the little people of who’s in charge, Northern Pulp threatens to shutter the plant, if it doesn’t get its way—throwing 300 plant workers out of work and damaging the livelihoods of countless more small wood producers who supply the mill.

Boat Harbour is a tidal estuary in the heart of First Nations land near Pictou, NS. “It was once a place the Mi’kmaq people trusted,” remembers Pictou Landing First Nation Chief Andrea Paul. “When they were hungry, they found food there. When they were sick, they sought natural remedies at the shoreline and when people came and tried to take away the children to residential schools, that’s where they hid.”

Boat Harbour is a dead pool now. Nothing lives there. Not since it was turned into  a toxic waste “settling pond” in 1967.

Taking over Boat Harbour to use to dispose of toxic sludge was an act of cultural aggression. It was also a direct attack on the health and well-being of the First Nations people living along its shores.

The Mi’kmaq communities fought for years to get the mill to stop using Boat Harbour to treat toxic waste. In 2104 a leak spilled 47 million litres of pulp effluent onto Pictou Landing First Nation land. The First Nations people of Pictou Landing had had enough.

They set up a protest blockade until the government agreed to close the Boat Harbout Treatment Facility. In May 2015, the Boat Harbour Act set January 2020 as the deadline date to close Boat Harbour for good. The Mi'kmaq would finally get their long overdue chance to reclaim something of great spiritual and practical value.

What happened to the First Nations communities of Pictou Landing didn’t have a name in 1967—beyond business as usual. It has a name now—an ugly one. It’s called “environmental racism.” A lot of people don’t like what it is. Particularly young people. Young people like the movie star Ellen Page.

Page explained it all to Stephen Colbert on his CBS TV network show on February 1. She told him that environmental racism is the practice of placing things white people don’t want in their backyards—like town dumps or the toxic waste pond in Boat Harbour—in the backyards of “marginalized people”, more often than not people of colour.

Page tweeted about her TV encounter to more than a million followers. The YouTube video of her interview has had more than 1.3 million views.

This is exactly what politicians trying to slide by on the issue of global warming do not need.

Local anger at the boiling point

Local anger over the issue has been at the boiling point from the get go. Public protest has included a series of large public demonstrations, stretching to civil disobedience.

The outrage of environmental activists is at least matched by local fishermen whose roots go back 246 years to when the first settlers from Scotland landed in Canada at what is now Pictou. Messing with fishing in Pictou County is messing with a way of life, as well as a way to make a living. 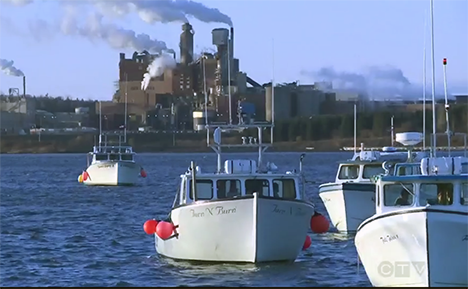 Fishermen from Nova Scotia, New Brunswick and Prince Edward Island are all convinced the proposed “solution” of a new pipe spewing mill effluent into the open ocean will kill their fisheries. They gathered in a flotilla of boats last June to sail into Pictou Harbour to protest the mill's plans.

By late October they were using their boats to disrupt the work of a boat carrying out surveys for the mill. When NS premier Stephen McNeil publicly scolded them and asked them to stop they doubled the number of boats in their blockade.

Nova Scotia courts have since granted a permanent injunction to stop the fishermen’s boat blockade. The fishermen have said they will abide by the court’s ruling.

But there is no sign that the fishermen have lost their resolve to win this fight.

It was Bob Dylan who famously sang: “Because something is happening here / But ya’ don’t know what it is / Do you, Mister Jones?” There is definitely “something happening” in Pictou and it’s not clear the politicians know what it is.

Old ways of thinking are dying out. A new self-awareness is growing, New ways of working together are coming to life.

This new reality is captured in the words of a fisherman in a video supporting the fight against the mill. He says: “My biggest regret is not backin them [the First Nations], no pullin behind them and helpin them. But I am now—because it affects me. And that’s not a good thing.

And that is just what could make all the difference for the fishermen of the Northumberland shore, the townspeople of Pictou, the First Nations People of Pictou Landing and electoral fortunes of Justin Trudeau.

Premier Stephen McNeil, for his part, has admitted that his government may, in the end, have to bow to the will of the people and deny the Northern Pulp Mill all it wants—even if that means the mill closes down.

It's the kind of unexpected thing that can happen in a perfect storm.