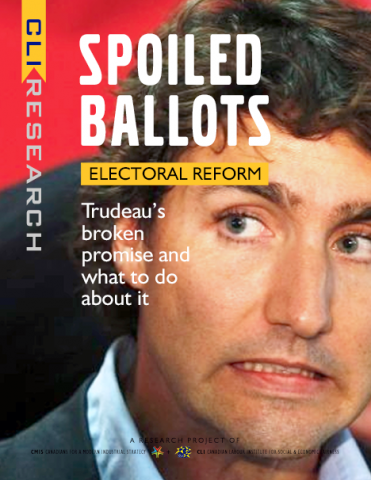 PROPORTIONAL REPRESENTATION IS A LOT LIKE PEACE. We all want it, but we somehow can’t manage to get it. Not in Canada at least.

PROPORTIONAL REPRESENTATION IS A LOT LIKE PEACE. We all want it, but we somehow can’t manage to get it. Not in Canada at least. The reasons why are clearly set out and analyzed in “Spoiled ballots: Electoral reform, Trudeau’s broken promise and what to do about it” the newest research publication from the CLI (Canadian Labour Institute).

The paper has everything you need to know to understand how proportional representation works, what it offers and to also solve the riddle of why we still don’t have it—despite six referenda and prime minister Justin Trudeau’s promise that, “2015 will be the last election under FPTP (first-past-the-post)—a promise the paper points out he made 1,800 times in his 2015 election campaign. And, a promise he has told us all he will not keep.

Expert and public opinions are then considered, showing that proportional systems are clearly preferred. The only question left is which of the two most popular proportional representation systems is the best for Canada.

Why the hold up?

Study after study shows the vast majority of Canadians also like the idea of proportional representation—making every vote count—and yet we consistently reject it when offered. Most recently in PEI.

A “yes” vote had to meet two thresholds to trigger a change: the support of a majority of Island voters in the referendum (50 per cent, plus one vote), and majority support in at least 60 per cent of the Island’s electoral districts (17 of 27 districts). Islanders. Neither threshold was met.

British Columbia has had three proportional representation referenda since 2005. All have failed. Most recently in December 2018.

The CLI paper argues that one key reason for the failure of proportional representation referenda is that the deck is always stacked in favour of the status quo.

Typically, the public has a very weak understanding of electoral possibilities beyond FPTP and the ballot itself is devised to favour the status quo.

In BC, for example, the status quo option was highlighted in the referendum question which biased responses significantly in favour of FPTP.

These same factors contributed to the failure of each of the six such referenda in Canada—though, to be fair, two of those “failures” were from referenda where proportional representation received more than 50% support.

Other attempts at electoral reform, such as the recent federal Liberal process, were based on deeply suspect methods of gauging public opinion. Without better ways of capturing the public’s true preference, it seems we will remain stuck with Canada’s FPTP electoral system.

‘Try before you buy’

The CLI paper points out that, once fully informed and educated, the public has a strong preference for proportional systems—just like all the experts and academics.

The paper asserts that it is fear of making a mistake that stops the general public from voting for electoral reform. This calls for a “try before you buy” approach.

A “yes or no” referendum alone is not a good or fair way to capture the public’s true preference on electoral systems. A better course would be to hold several elections using a proportional representation method. Then, with this experience to call on, a referendum to keep or reject proportional representation would capture what the public really prefers.

For example, New Zealand adopted a proportional representation system in 1996. It held a referendum in 2011—15 years later— to see if the public wanted to keep its proportional system. The result, from an informed an experienced electorate, was an overwhelming and increased approval of the system.

The CLI paper concludes Canadian political parties should be encouraged to campaign on a promise of electoral reform, coupled with a referendum after several elections under the new system. With such a mandate, the short-term change would be legitimate and the later referendum would capture Canadians’ true preference.

The complexities of electoral systems are taken up in even more detail in four accompanying backgrounders: